Why Are We So Afraid of GMOs? 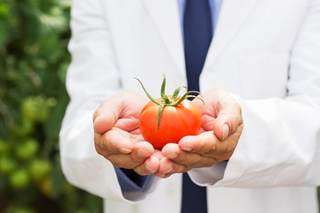 Farmers have been intentionally changing the genetic makeup of plants for more than 10,000 years.

Over the last few years, there has been a noticeable increase in food products labeled "contains no GMOs.” Such claims can be found on foods in supermarkets, on cosmetics, touted in television commercials, and is a topic my patients bring up.

Well, what are GMOs and why are people so afraid of them?

A GMO, or genetically modified organism, is an organism in which the genetic material or DNA has been altered in a way that does not occur naturally by mating and/or natural recombination. “Organism” can refer to a plant, animal, or microorganism.

People tend to view this kind of modification as “messing with nature” — a potentially dangerous thing to do. However, farmers have been intentionally changing the genetic makeup of plants for more than 10,000 years. Nearly every vegetable, grain, and fruit that is commercially available today has been altered by humans along the way.

Once farmers saw that crossbreeding crops produced plants that were more palatable or more disease-resistant (or both), the practice became standard. It is this not-so-new technology that allows corn to be resistant to certain insects and soybeans to be able to survive drought.

Although seeing so much advertising of what is GMO-free would make anyone think that the GMO presence is ubiquitous, in fact, there are not that many crops that are approved for genetic engineering.

Surprisingly only 10 crops have been approved: alfalfa, canola, papaya, soybean, sugar beets, corn, cotton, squash, potatoes and apples. Recently, we came home with a new kind of apple I'd never heard of called “Envy.”  It turns out to be a cross between Gala and Braeburn — and I have to say it was the best apple I have ever tasted!

Some people believe that GMO foods may be less nutritious, a claim that has not been proven. Some argue that GMOs are or might be harmful to the environment. On the contrary, genetic engineering often reduces the amount of pesticides needed to produce a crop — making the plants both safer to eat and reducing the amount of chemicals from pesticides that get released into the environment.

So, in the absence of any scientific evidence showing that GMOs negatively impact human beings in any way, I say, I want my GMOs!