Impact of Sleep Deprivation on Clinical Outcomes in Cardiology Unclear 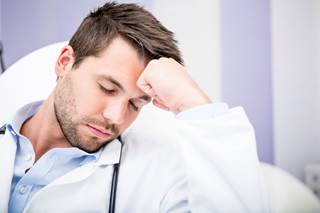 The interns working the traditional schedule with extended work shifts every other day had made a greater number of serious medical errors compared with those working a reduced schedule.

Despite the prevalence of acute and chronic sleep deprivation among percutaneous coronary intervention (PCI) operators and other interventional cardiologists, current data show no significant association between sleep deprivation and adverse patient outcomes, according to a research paper published in Catheterization and Cardiovascular Interventions.

The investigators reviewed and described sleep deprivation among interventional cardiologists and its effects on patient care and physician health.

According to their review of the literature, poor sleep habits among physicians can result in fatigue, cognitive deficits, workplace errors and injuries, and reduced empathy and communication toward patients.

The researchers report that existing literature suggests no clear effect of sleep deprivation on patient outcomes, including outcomes related to procedural success and mortality. Despite the lack of significant associations, the researchers commented that patient care may still be impacted “even if clinical outcomes are not affected by sleep deprivation.”

The first year of medical residency have been studied somewhat extensively, with some studies including information on sleep deprivation. The researchers conducted a prospective, randomized study that examined serious medical errors made by interns while working either a standard schedule with ≥24-hour shifts every other night compared with working a schedule without extended ≥24-hour shifts and with fewer work hours per week. The interns working the traditional schedule with extended work shifts every other day had made a greater number of serious medical errors compared with those working a reduced schedule (176 vs 91, P <.001).

In a field with numerous occupational hazards, such as orthopedic injuries and radiation, the researchers urge the importance of “increasing awareness from … interventional cardiology in order to attenuate the potential negative impact of sleep deprivation.”