The Effects of Wearable Fitness Trackers on Obesity and Inactivity 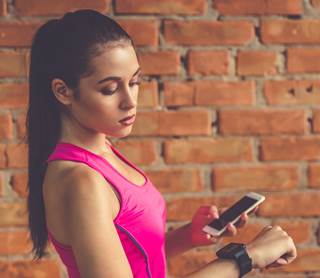 Wearable fitness trackers may not be a universal panacea, but they are still useful tools to help fight against obesity.

A couple of years ago, the writer David Sedaris penned a short essay chronicling what he referred to as his time “living the Fitbit life.” The piece charmingly guides us from Sedaris' credulous introduction to the technology (“is that a watch?”), to his days of clocking 15,000 daily steps (“not bad … if you're just getting used to a new prosthetic leg”), and then 30,000 daily steps (“honestly, how lazy can you get?”), all the way to his zenith of 65,000 daily steps — nearly a marathon's worth — every day.1 Mr Sedaris harbors no illusions: his is a picture of obsession and maybe even compulsion. Underneath all that, though, is he also gesturing toward the passkey that will unlock a future free from obesity  and inactivity?

Probably not. Last year, JAMA published what seems to be the first large-scale randomized trial examining the effect of wearable fitness technology on weight loss and other markers of health.2 The study participants committed to a 6-month program of traditional weight loss methods before being split into 2 groups. The standard group charted their calorie consumption and activity levels manually, whereas the enhanced group had a wearable fitness device. Study participants in both cohorts dropped a similar number of pounds through 6 months, but after that, the standard group lost significantly more weight, or more accurately, gained back less weight. Not only did the wearable fitness trackers not help people achieve their weight loss goals, the devices actually seemed to hurt. Is this really what Mr Sedaris and so many others have been obsessing over?

A deeper dive into the data doesn't do much to clarify the situation. It turns out that the wearable tech group lagged behind not only in weight loss but also in amount of both low- and medium-intensity exercise. All told, those with wearable devices were sedentary for 18 minutes more per day than their nontracked counterparts. Unlike the weight loss difference, these latter gaps were not judged to be statistically (much less clinically) significant, but they still paint a consistent picture of the wearable device's inability to get its users off the couch.

The results of the study left its authors at a loss. They halfheartedly suggested that perhaps the trackers were somehow not as effective at inducing (or maintaining) positive shifts in diet and exercise habits as traditional methods, which seems valid as far as it goes, but fails to get at the reasons underlying the finding. The devices themselves were worn on the upper arm (as opposed to on the wrist, like contemporary Fitbits) so it is certainly possible that the data simply were not sufficiently accessible to the users and as a consequence failed to motivate them. This, however, still doesn't address why many fitness markers actually regressed among the wearables group.

If that's not enough, the JAMA study looked only at people who were actually wearing and using their devices. In the messy world that exists outside of random controlled trials, it is not clear how many people truly fall into that category. The most recent estimates suggest that Fitbit, the largest manufacturer of wearable fitness technology, has sold something like 60 million units; however, the company claims only 23 million active users — and that figure probably overestimates user engagement because it likely includes a substantial number of wristbands and Wi-Fi-enabled scales that are hooked up but not being used in any meaningful way.3 It looks like we might have to keep looking for that magical key to a future where everyone is fit, healthy, and happy.

And there's nothing wrong with that. The conclusions of the JAMA study are certainly provocative and are likely to inspire and inform future investigations, but that is precisely what studies of that sort are supposed to do. Meanwhile, I think the best way to read that study is not as a blanket indictment of the technology — the study's authors are not making that claim, after all. Instead, the study conclusions should be viewed as an acknowledgment that wearable fitness trackers are not silver bullets — which is something that we should have known all along. Our best understanding of dietary science has led us to encourage our patients to undertake a variety of interventions in pursuit of a healthier future: restricted diets, consistent exercise, and sometimes pharmaceuticals or surgery. We do this not only because these efforts often work synergistically, but also because we know that any given intervention may not work for any given patent. We throw a lot of approaches at the wall and see what sticks. One size does not fit all.

That, I think, is at least part of what Mr Sedaris is trying to tell us. By the end of the story, his steps obsession continues to grow — walking for Fitbit's sake is sucking up 9 hours out of his day, and there is no end in sight. The Fitbit has completely transformed (okay fine, monopolized) his life and pushed him well beyond any reasonable expectations of improved fitness that he might have held at the start of his journey. Even considering his well-documented addictive personality, that outcome could not have been reasonably predicted. It is just one of the wide array of possible end points that we know might result from a given intervention — an extreme example to be sure, but still within the range. Every new Fitbit user will fall somewhere on that same spectrum. Because of that, we should not see these devices as some sort of universal panacea, but as one of many tools on our tool belt. And we shouldn't be afraid to use it. Because, as one of Sedaris' friends pointed out to him when he was still a Fitbit neophyte: every little bit helps.