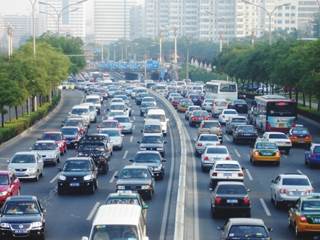 HealthDay News — The beneficial cardiopulmonary effects of walking are attenuated when walking in a traffic polluted area, according to a study published in The Lancet.

Rudy Sinharay, MBBS, from Imperial College London, and colleagues recruited 40 healthy volunteers, 40 individuals with chronic obstructive pulmonary disease (COPD), and 39 with ischemic heart disease, age 60 years and older, to a randomized, crossover study. Participants were randomized to do a 2-hour walk along a commercial street in London or in an urban park.

The researchers found that the concentrations of black carbon, nitrogen dioxide, particulate matter (PM10) and PM2.5, and ultrafine particles were higher in Oxford Street. Compared with Hyde Park, after walking down Oxford Street, participants with COPD reported more cough, sputum, shortness of breath, and wheeze (odds ratios, 1.95, 3.15, 1.86, and 4.00, respectively). Regardless of disease status, walking in Hyde Park led to an increase in lung function and a decrease in pulse wave velocity and augmentation index up to 26 hours after the walk. These beneficial responses were attenuated after walking on Oxford Street.

"Short-term exposure to traffic pollution prevents the beneficial cardiopulmonary effects of walking in people with COPD, ischemic heart disease, and those free from chronic cardiopulmonary diseases," the authors write. "Policies should aim to control ambient levels of air pollution along busy streets in view of these negative health effects."

One author received honoraria for participating in advisory board meetings of the pharmaceutical industry relating to treatments for asthma and COPD.