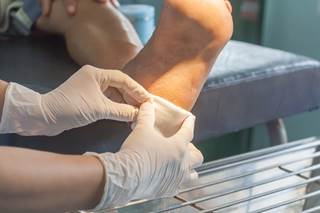 Patients who received treatment with the Dermapace System had an increase in wound healing at 24 weeks.

The Dermapace System is intended for use in the treatment of chronic, full-thickness diabetic foot ulcers with wound areas up to 16cm2 in patients aged ≥22 years, presenting with diabetic foot ulcers lasting over 30 days. The extracorporeal shock wave system uses energy pulses to stimulate the wound and should be used with standard diabetic ulcer care.

The approval was supported by data from 2 multicenter, randomized, double-blind studies involving 336 patients receiving either usual care (wet-to-dry dressings or debridement) as needed plus the Dermapace System therapy or usual care with a sham shock wave therapy.

Pain during device application, local bruising and numbness, migraines, nausea, fainting, wound infection, cellulitis, osteomyelitis, and fever were among the most commonly seen side effects.