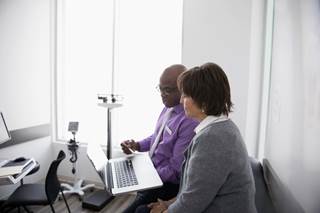 EHRs reduce medical errors and facilitate greater coordination of care, but the tasks required by EHRs can compromise patient encounters.

Electronic health records (EHRs) can improve health care by reducing medical errors and facilitating greater coordination of care. However, these improvements often come at a price. A growing body of research suggests that the burgeoning number of tasks required by EHRs can compromise patient encounters. For example, a recent study of 2237 hospital- and office-base physicians found that most respondents regarded EHRs as having a negative effect on both the quantity and the quality of time they spent with patients.1

What role do you play in EHR at your institution?

Beyond my clinical responsibilities, I am involved with overseeing the hospital's EHR and I also study ways in which the health record is affecting communication between providers and patients. I've had colleagues say to me, “I wish I didn't have use this EHR because it's making it much harder to bond with patients.” I say, “It doesn't have to be that way, but that's the way it is right now.” So it is important to figure out strategies to minimize the negative impact and maximize the strengths of the EHR.

What are your perspectives on the role of EHRs in patient care?

I don't believe that EHRs are inherently evil. In fact, they can be very important in offering patient-centered care. If it is designed well, an EHR can not only be a way of accessing notes from another clinic or hospital, but also a way of getting information to the patient via patient portals.

In addition, the EHR can help us find out when things are not working well for a given patient. For example, being able to look at the patient's medications as they cross from one setting of care to another is very important. If a patient being treated with medication is discharged from the hospital and must now fill the prescription at a local pharmacy, there may be a difference in formulary between the hospital- and the outpatient-based pharmacy that can be both confusing and dangerous to the patient. The EHR also allows the provider to see if the patient has indeed picked up the medications and, if the patient has not done so, the provider can address the patient's reasons and concerns.

Page 1 of 3
Recommended for you
Related Topics