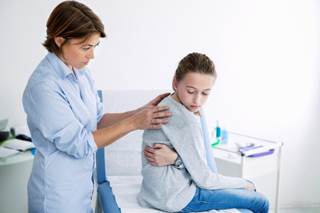 The USPSTF has released an updated recommendation for the screening of idiopathic scoliosis in asymptomatic adolescents.

The US Preventive Services Task Force (USPSTF) has updated its 2004 recommendations on screening for idiopathic scoliosis in asymptomatic adolescents, as published in JAMA.

The task force, led by David C. Grossman, MD, MPH, from the Kaiser Permanente Washington Health Research Institute, reviewed all available evidence on the benefits and harms of screening for, and treatment of, adolescent idiopathic scoliosis. This recommendation applies to asymptomatic children and adolescents aged 10 to 18 years. It does not apply to children and adolescents presenting for evaluation of back pain, breathing difficulties, abnormal radiography findings or other imaging studies, or obvious deformities in spinal curvature.

The task force found no direct evidence regarding the effect of screening for adolescent idiopathic scoliosis on patient-centered health outcomes. The USPSTF found inadequate evidence on the treatment of idiopathic scoliosis (Cobb angle <50° at diagnosis) in adolescents with exercise or surgery or its effects on health outcomes or the degree of spinal curvature in childhood or adulthood.

The task force found no studies on the direct harms of screening, such as psychological harms or harms associated with confirmatory radiography, and inadequate evidence to determine the harms of treatment.

The USPSTF concluded that the current evidence is insufficient and that the balance of benefits and harms of screening for adolescent idiopathic scoliosis cannot be determined (I recommendation).

In a related editorial, authors M. Timothy Hresko, MD, Richard M. Schwend, MD, and Richard A. Hostin, MD, stated, “Although the current analysis by USPSTF represents an upgrade in evidence from its prior recommendations against screening programs, clinicians who care for adolescents have expressed disagreement with USPSTF on this issue. The Scoliosis Research Society, American Academy of Orthopaedic Surgeons, Pediatric Orthopaedic Society of North America, and American Academy of Pediatrics recommend that girls be screened twice, at ages 10 and 12 years, and boys once, at age 13 or 14 years. Further research into the value of early scoliosis detection during the adolescent medical home preventive health visit needs to continue.”