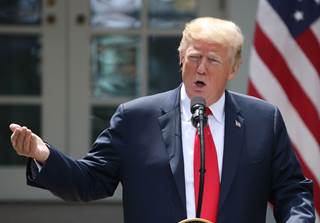 The VA Mission Act will allow veterans to receive care at any number of community or private clinics outside of the VA Health System.

Despite adding his signature to the Veterans Administration (VA) Mission Act, President Donald Trump is now fighting a bipartisan plan to fund the much-needed expansion to veterans' health care.

The bill, sponsored by Republican Senator Johnny Isakson from Georgia, became law on June 6. The Mission Act would establish community care programs coordinated by the VA, access standards for quality, and review the infrastructure of the current VA health system.1

According to the Washington Post, President Trump seemed “very happy” to sign the bill. In a Rose Garden ceremony, the president was quoted as saying, “This is a very big day. Choice. We've been looking for choice for a long time, and today is the day. So, it's very important. Very happy.”2

However, President Trump quickly changed his tune, claiming that he disliked portions of the law and that the administration was opposed to “certain funding measures.” In a statement by the president, he claimed that some provisions of the bill infringe on presidential authority.2

The White House is also opposed to the increased federal funding that will be required to pay for the healthcare initiative.

In an interview with the Chicago Tribune, John Hoellwarth, communications director of AMVETS, said, “You shouldn't have to ask Congress every year for money to take care of veterans.”3

The largest costs linked to the new legislation include new physicians's appointments outside of the VA system.