In The Zone: Why Don't Surgeons Experience Flow? 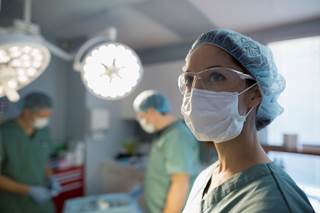 Just like athletes and musicians, surgeons perform obsessively practiced, cognitively complex, and physically demanding tasks under the brightest of lights.

My favorite moments in sports are all the same: that sliver in time where a superstar somehow, for a few fleeting moments, elevates their game from its already elite level to even more rarefied air. It never lasts long — a couple of minutes, a few sets, or for the especially fortunate, a whole game — and then vanishes as suddenly it appeared.

You know it when you see it: think Tiger Woods draining a long chip. Wayne Gretzky threading a wrist shot through the five hole. Michael Jordan burying shot after shot and then shrugging at the opposing bench, dripping with false modesty. It's excellence personified.

Athletes call this “being in the zone.” They are temporarily so in tune with a task that they figuratively — and usually literally — can't miss. Elite musicians sometimes brag about similar experiences. Coders gush about getting “wired in,” and gamers long to find their way to a “TV trance.” Psychologists have adopted a different name for it — they call it “flow.”

Just like athletes and musicians, surgeons perform obsessively practiced, cognitively complex, and physically demanding tasks under the brightest of lights. Yet as far as I can tell, surgeons don't seem to talk about flow, or being in the zone, or anything similar, which is, arguably, at least a little bit odd. Any given surgeon's performance will vary from day to day and operation to operation, so it's reasonable to suppose that the some surgeons — perhaps the very best, the Jordans and Woodses and Gretzkys of the profession — would, at least every now and again, get in the zone. But nobody seems to be talking about it. What gives?

Mihaly Csikszentmihalyi, PhD, a distinguished professor of psychology and management at Claremont Graduate University in Claremont, California, is the psychologist who coined “flow” in the 1980s. Dr Csikszentmihalyi hypothesizes that a flow experience depends on a number of conditions: intense concentration on the present moment, confluence of awareness and action, loss of capacity for reflective self-consciousness, tight personal agency over the activity in question, and an alteration of subjective temporal experience.1 Additional “flow” conditions, suggested by other psychologists, include feeling the potential to succeed and becoming so engrossed in the experience that other needs (food, bathroom, the word “please”) fall away.2 It seems to me that each of these is an outcome that is frequently achieved in the operating theater; a few even sound suspiciously like day-to-day existence for a not insignificant number of surgeons. The operating room still sounds like the perfect environment to feel the flow.

Because we can safely put aside the suggestion that surgeons are either too dim (no specialty is more obsessed with self-evaluation or scrutinizing performances) or too modest (please) to recognize or acknowledge being in the zone, there is one more possibility that might explain the absence of flow in the surgical community. In Dr Csikszentmihalyi's estimation, the final component of flow is that the experience feels intrinsically rewarding, which is also known as an autotelic experience.

If you're looking to have an autotelic experience, it probably helps to have an autotelic personality. There's nothing approaching a consensus as to precisely what traits this personality type encompasses, but everyone more or less agrees that for autotelics — from the Greek words for “self” and “goal” — the experience itself, rather than an expectation of a future benefit, is the main goal.3 Psychologists think that autotelics are defined at least in part by their curiosity, persistence, lack of self-centeredness, and again, the high likelihood of performing an action for its own sake.4 For autotelics, it's not the destination — it's the journey.

Therein lies the problem. For surgeons, the destination is everything. Nobody in their right mind (or remotely interested in adhering to even the most basic medical ethics) would ever agree to perform a surgery, unless the outcome —which is to say, the destination — was promising. Far from being indifferent to the possibility of future benefits, the idea that a patient's future life will be improved is the only reason that ever justifies stepping into the operating room at all. That reality might well preclude surgeons ever getting to experience flow in the operating room; that seems like a small price to pay for keeping our focus where it should be: on patient outcomes.

As it happens, Dr Csikszentmihalyi coined the term “flow” after several athletes and musicians described their flow experiences as being akin to being passively carried along by a river's gentle current. That sounds great for sports or music; just relax, let go and let the game come to you. But is that really what you want from your surgeon?