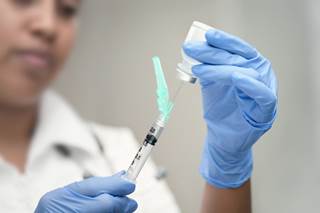 This study shows that in some facilities, up to half of their heath care workers are not receiving the annually recommended vaccine against the influenza virus.

HealthDay News -- According to a research study published in the US Centers for Disease Control and Prevention's Morbidity and Mortality Weekly Report, approximately 1 in 5 American health care workers do not receive the annual influenza vaccination, and in some facilities, that number exceeds half.

To assess recent rates of flu vaccinations in the health care community, Carla Black, PhD, an epidemiologist at the CDC's National Center for Immunization and Respiratory Diseases, and her team analyzed data from the last 2 flu seasons.

In the 2015-2016 flu season, 79.0% of all health care workers reported being vaccinated, which was similar to the 77.3% who said they got flu vaccines in the 2014-2015 flu season. Health care personnel who worked in hospitals were most likely to be vaccinated (91.2%), compared with people who worked in clinics (79.8%) and those employed in nursing homes and long-term care facilities (69.2%).

Despite having lower overall vaccine coverage, long-term care facilities were the only places where vaccination rates increased in 2015-2016 -- an increase of 5.3%. Doctors continued to be more likely to get a flu vaccine (95.6%) than medical assistants and aides (64.1%).

Vaccination rates dropped to 44.9% in health care facilities where vaccination wasn't required of employees. The most effective way of ensuring that health care workers get vaccinated seems to be by making it a requirement, the researchers noted. The highest overall rates of vaccination were in facilities that mandate flu vaccination for workers (96.5%).