Many Pediatricians Not Adhering to Revised Peanut Allergy Prevention Guidelines 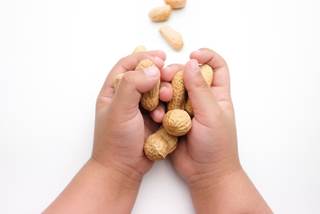 Significantly more guideline adherence was seen for pediatricians who treat patients with food allergies; there was no difference between academic and community-based providers.

HealthDay News — Many pediatricians are not adhering to revised guidelines for peanut allergies that recommend early introduction to high-risk infants, according to a study presented at the American College of Allergy, Asthma and Immunology Annual Scientific Meeting, being held Oct. 26 to 30 in Boston.

Bryce Hoffman, MD, from New York-Presbyterian Hospital in New York City, and colleagues administered a survey instrument to general pediatricians affiliated with a single academic medical center to examine demographic and practice characteristics, counseling practices, and knowledge of revised guidelines. Physician adherence to guideline recommendations was rated on a 0-to-4 scoring system.

Responses were received from 42% of 188 pediatricians; 56% were community-based. The researchers found that 38% of pediatricians scored 1 or less on guideline adherence, and 11% scored 4.

In high-risk patients, most pediatricians (77%) recommended introducing peanuts later than 4 to 6 months. Significantly more guideline adherence was seen for pediatricians who treat patients with food allergies; there was no difference between academic and community-based providers.

"Our studies reveal that although pediatricians have been introduced to the new guidelines, they're not yet putting them into practice," Hoffman said in a statement.