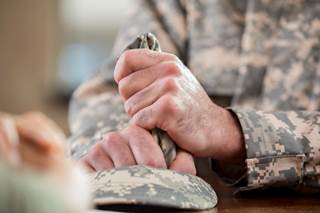 Remission was achieved in 39% of the total trial population due to close clinical surveillance, concomitant medication use, and interaction with clinical staff.

The effect of repetitive transcranial magnetic stimulation on US veterans with treatment-resistant major depression was deemed insignificant; however, remission was achieved in 39% of the total trial population due to close clinical surveillance, concomitant medication use, and interaction with clinical staff, according to a study published in JAMA Psychiatry.

Although veterans with comorbid post-traumatic stress disorder (PTSD) and substance abuse were included in the study, all participants were stabilized on psychotropic medication prior to randomization and continued concomitant medications while receiving repetitive transcranial magnetic stimulation treatment. The primary outcome of the trial was remission of depressive symptoms defined as a score ≤10 on the Hamilton Rating Scale for Depression. Measures of depression, PTSD, hopelessness, suicidality, and quality of life were secondary outcomes.

The study results showed no significant treatment effect between groups: 33 of 81 participants in the active treatment group achieved remission compared with 31 of 83 participants in the sham treatment group. Of all veterans who participated in the study, a total of 39% (64 participants) achieved remission of depressive symptoms. Reported baseline demographics and clinical characteristics were similar among the treatment groups, and non-significant findings were also reported in secondary outcomes analysis. These results suggest the value of close clinical monitoring and concomitant medication use, as well as the benefit of regular interaction with clinical staff to improve depression in a treatment-resistant population.

The high remission rate for veterans with treatment-resistant major depression in this study may be attributed to greater expectations of improvement among veterans. Furthermore, adherence to a psychotropic medication regimen was required of all participants, and patients experienced more extensive interaction with clinical staff than in typical outpatient settings. This study supports the effects of close clinical observation and the use of combined treatment interventions including repetitive transcranial magnetic stimulation for achieving remission in veterans with treatment-resistant depression.

This research was fully funded and supported by the Cooperative Studies Program, Office of Research and Development, US Department of Veterans Affairs.