A Physician Recalls His First Lesson In Humility 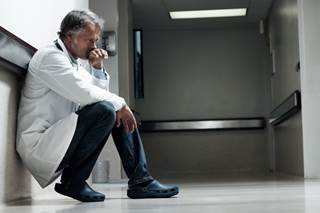 Humility is a lesson we are taught over and over again.

I remember being more confident than most of my peers. The look of dread on my fellow interns' faces pre-call, and the fatigue on them post-call always seemed unnatural to me. Maybe it was because of my lifelong pursuit of medicine.

I felt nothing but elation at the newly minted "M" and "D" after my name on the hospital badge. I was no longer a volunteer, no longer a student — I was a doctor. And part of that persona was walking into the unknown with a certain amount of confidence. This was exactly where I was meant to be.

A few months into internship, I admitted a lady with a skin infection on her thigh. I started the appropriate antibiotics and waited. My resident, noting the appearance of the skin, asked me to order an x-ray. I placed the order, but I was secretly befuddled – “Why order an x-ray?  What on earth was that going to show?”

I was on call and busied myself with the drudgery of being the low man on the totem pole. I admitted 5 new patients; I drew blood; I did paperwork; I spent hours in front of the computer screen looking up labs and filling out charts — but I forgot one thing.

Maybe it was because I didn't understand my resident's clinical reasoning. Maybe somewhere in the recesses of my mind, I had written the order off as something superfluous or unnecessary. To this day, I can't explain why I failed to follow up on the x-ray of my patient's thigh and retrieve the results. Some things remain unexplained.

The next morning, my resident and I breathlessly ran to the patient's room at her nurses prompting. Her blood pressure was dangerously low and her temperature was sky high. My resident looked at me in a panic and inquired about the x-ray. After we stabilized the patient, we ran to radiology and looked at the films. Our worst fears were confirmed upon staring at the light box: subcutaneous gas.

The patient had necrotizing fasciitis — a severe skin infection — and needed immediate surgery to remove as much of the infected tissue as possible. She would likely lose her limb.

Years later, I can't help but wonder how much better she would have done if I had seen the film the night before, and surgery had been performed immediately. The patient survived either way — but by a hair and with the loss of her leg.

And I learned an important lesson that night in humility. A lesson I would be taught over and over again as I journeyed through medical education and beyond.

Disease is tougher, more resilient, and far more cunning than the minds of the medical experts who struggle to tame it.

It is only to be rivaled by the spirit of our brave patients, who battle day in and day out to survive.