The Lost Meaning of a Pager's Alarm 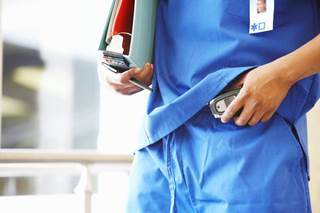 A doctor experiences the misuse of a hospital pager.

I felt like the stack of charts rose past my head and all the way up to the ceiling.  I pulled out my pen, opened the first one, and started charting.

I took a moment before each note to collect my thoughts.  The patients were complex, the problems sometimes insurmountable — and the nursing station where I was sitting was buzzing with activity. Phones rang. Alarms cried for attention. On the desk beside me was a case filled with a dozen pagers.

Every 30 seconds, one of the pagers would sound off and vibrate. The motion would send the case rattling against the desk, not only obliterating my concentration, but also fraying what was left of my poor, fragile nerves.  Twice a minute, in relentless repetition, the chorus of rattling, chirping, beeping, or chimes blared.

Periodically, a passing staff member would distractedly reach out and press a button on a particular pager, and then go back to whatever they had been doing.  Hell, even I silenced the racket from time to time when the noise became unbearable.

I endured this cacophony for an hour as I finished writing my notes. By the time I was done, my eyes were red and my hair on end from running my hands through it.

As far as I could tell, the only function of this rattling, chirping, and beeping barrage was to drive doctors crazy. Most of the time the desk at the nursing station was the only place they had for charting. Nor had I seen a single definitive action taken in response to the buzzing pagers — other than to turn them off.

As I left the nursing station, I passed the secretary and curiosity prompted me to ask.

Me: “Hey, you know those pagers on the desk?  They're constantly going off.  What a racket!  What are they used for?”

Secretary: “Those pagers?  They're connected to the patient's call lights.  Every time a person hits the button at the side of the bed for help, one of those goes off.”

Secretary: “You know, like if a patient needs to get out of bed, or is hungry, or has to go to the bathroom.”

Me: “Or if they have chest pain, shortness of breath, or fell and broke a hip?”

Secretary: “Yeah, I guess that stuff too.”