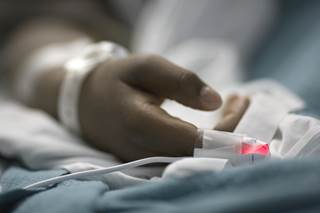 It’s time for healthcare providers to change the status quo when it comes to medical care for transgender and gender-nonconforming patients.

After frequent visits to a clinic 2 hours away for multiple procedures and follow-up appointments, Jack Bergman was nearly done with his gender-affirming top surgery. Bergman, a transgender man from Peekskill, New York, only needed the stitches around his grafted nipples removed, something his surgeon said his primary care physician could do. But his physician's office sent Bergman to urgent care instead.

Though he presented as male, his paperwork still identified him as female, initially confusing the receptionist, but she remained professional after he explained his situation, he said. It was the physicians' and nurses' behavior that made Bergman never want to seek emergency care again.

“Of course they did not use the proper pronouns despite my requests, and I could see the doctors and nurses whispering to each other. I had no idea if they were going to treat me or not,” Bergman told Medical Bag. After he removed his shirt and lay down, they left the curtains open while a doctor spent an hour removing stitches, grumbling and shaking his head all the while.

“I felt like a spectacle as nurses and patients passed by, looking at me out of the corner of their eyes,” he said. “I felt so exposed and misunderstood, not like a human but like a chore, like a toilet that someone was begrudgingly cleaning. I have never been back there.”

Since then, he said, he will do everything in his power to avoid visiting urgent care or an emergency department (ED).

“The anxiety of having to explain what transgender means to a doctor and the possibility of feeling their hate when I am in enough pain to seek medical treatment is enough to make me rather suffer at home,” he said.

Bergman's experience is far from unusual in the approximately 1.4 million US adults who identify as transgender or gender nonconforming.1

“The emergency medicine community must recognize that transgender patients feel unsafe in the ED, and this feeling is grounded in real patient stories,” wrote Ryan N. Gorton, MD, of Lyon-Martin Health Services in San Francisco, and Carl T. Berdahl, MD, of the Cedars-Sinai Medical Center in Los Angeles, California.2 Their commentary in the Annals of Emergency Medicine discussed 2 studies in the journal's February 2018 issue: a survey of ED physicians regarding transgender treatment and health,3 and a qualitative study of transgender patients' experiences with emergency care.4

The survey of ED physicians3 found that nearly 9 in 10 respondents (88%) had cared for transgender and gender nonconforming patients, yet most (82.5%) had never received formal training on caring for this population.

Dr Chisolm-Straker and colleagues sent a 9-question survey to 654 physicians in the Emergency Medicine Practice-Based Research Network, a self-selected group of American College of Emergency Physicians members, who agreed to participate in surveys. Of the 399 responses (61%), one-third answered all the survey questions, although most answered the majority of the questions.

Dr Chisolm-Straker and colleagues were particularly surprised that so few doctors — less than 3% — reported knowing about other clinicians conducting inappropriate pelvic and chest exams, despite widespread transgender patients' reports of such assaults.

“Perhaps they were not comfortable reporting bad behavior without also reporting that they'd done something about it,” she told Medical Bag. “Or perhaps they simply are unaware of these assaults.”

Patients may not always understand why a particular exam is necessary, she said, but they have a right to a thorough explanation and to refuse any part of the exam.

“Clinicians should explain why they believe a ‘sensitive' exam is relevant to the clinical situation, to help patients make an informed choice, but pelvic and chest exams (and any other physical exam) should not be performed if a patient declines,” Dr Chisolm-Straker told Medical Bag.

Just over half (53.8%) of physicians said they always ask about a patient's gender-related surgeries regardless of their complaint, suggesting that physicians “may be gathering unnecessarily invasive histories,” such as asking about a gender-affirming surgery when the complaint is an upper respiratory infection, the investigators wrote. Previous research has found such questions, when not clinically relevant, “erode [transgender patients'] sense of safety and discourage care-seeking behavior.”

The study also identified disconnects between ED physicians' experiences and those of transgender patients. Most ED physicians (86%) reported feeling comfortable asking a patient for their pronouns, and 79% agreed that asking a patient's sex at birth and gender were important.

Yet misgendering and sex-gender confusion are common complaints of transgender patients such as Kaiden Dunn, a transgender man from Warren, Michigan, who now avoids EDs after his visit for a stiff, painful neck following a fall. He was fitted with a neck brace from an appropriately concerned nurse, but everything changed after she took his medication history, which included testosterone shots. That nurse left and 3 other nurses in a row entered, asked for his ID, and then left while he wondered if and when he would receive care.

“This is when the ‘well, SHE fell down stairs. SHE can't remember if SHE hit HER head' comments were stated loudly outside my room,” Mr Dunn told Medical Bag. When the doctor finally saw him, she removed the neck brace, said he had muscle tension, and discharged him with an ibuprofen prescription.

Mr Dunn's mother, who works in healthcare, was angered they did not x-ray her son, and even Mr Dunn's primary care doctor told him never to visit that ED again. The “lack of knowledge and lack of compassion” in emergency care frustrates and saddens him.

“Honestly, I got the nicer part of this transphobic treatment,” he said. Though he's had positive experiences too, including encounters with his surgeon and primary care physician (PCP), the experience has made him wary.

“I need to see some specialists for my chronic illnesses, but I'm afraid to go because I don't know if they are safe,” he said.

Mr Dunn's experience echoes that of the transgender participants in the Annals of Emergency Medicine study4 conducted by Elizabeth A. Samuels, MD, MPH, of the Yale University Department of Emergency Medicine in New Haven, Connecticut, and colleagues, which reported qualitative data from 32 mostly male, mostly white transgender Rhode Island residents in 4 focus groups.

In the course of the study, 4 overarching themes emerged. The first related to structural issues: lack of privacy; unnecessarily repetitive or invasive questions about gender; and documentation problems in medical records that “produced feelings of embarrassment, frustration, and disempowerment,” the researchers wrote. The participants recommended that private areas be provided for sharing sensitive information and that intake forms include non-binary gender options and fields for names and pronouns.

The second theme focused on clinicians' poor competency with transgender care, leaving many patients feeling “burdened by assuming an educational role,” the investigators wrote. Clinicians didn't know what questions to ask or asked inappropriate questions — and rarely asked the patient what name or pronoun to use. Participants expressed discomfort with becoming the teaching subject with a half dozen residents crowding into the room, leaving the patient feeling “like a freak show,” one participant said.

The third theme participants identified was discrimination and trauma, such as having their anatomy scrutinized or mocked. Comments they shared included “Do you have a dick between your legs?” and “What do you have underneath the covers? If we have to do anything, are we gonna see something we're not used to?”

The participants suggested clinicians wear rainbow stickers, signs, or pins to “communicate to patients that they can safely disclose their gender or sexual identity.” They echoed Dr Chisolm-Straker in recommending that clinicians thoroughly explain to patients why particular exams or tests need to be done and be willing “to discuss alternative testing to minimize discomfort.”

The fourth theme was avoiding care because of the aforementioned issues. Like Mr Dunn and Mr Bergman, 43.8% of participants said they avoid emergency care, even for asthma exacerbations and respiratory and intestinal infections. In fact, Mr Bergman delayed seeking care for cramping pain from a side effect of his testosterone treatments — severe vaginal atrophy — because he had trouble finding a gynecologist familiar with transgender care and believed ED doctors would not be helpful.

“Emergency doctors need to learn about atrophy in transgender men so that if one of us comes in with cramping it can be addressed immediately,” he said.

Transgender patients' avoidance of emergency care is also concerning given that they are already at higher risk for psychiatric conditions, substance use problems, homelessness, HIV infection, suicide, homicide, and sexual and physical assault. In this study, 43.8% had been physically assaulted and 31.3% had been sexually assaulted.4

Care for transgender patients is basic, not “special,” training, Dr Chisolm-Straker said. Medical schools need to prioritize including this training in their curricula, and Dr Chisolm-Straker is working with her colleagues to build an appropriate CME curriculum.

They also need to approach all encounters with basic courtesy and professionalism, she said, starting with their introductions. She recommends using patients' last names initially: “For example, ‘Johnson? Hi, I'm Dr Chisolm-Straker, [how] what do you like to be called?' Doing that signals to transgender and gender nonconforming patients that you may be the kind of clinician who is willing to use their correct pronouns, which we all should be,” she told Medical Bag. “If you're unsure about the pronoun to use, just ask. Then use the correct pronoun. If you make a mistake, genuinely apologize and move on.”

She also emphasized the importance of having this conversation in respectful, low voices if it is taking place in a non-private space to avoid outing patients to anyone within earshot.

“One of my biggest fears is that a receptionist or doctor will make it obvious to other patients that I am trans,” Mr Bergman told Medical Bag. “We live in a world where trans people are murdered every day, so it is important that we can trust medical professionals to keep our status private.”

The time to start addressing widespread systemic problems with emergency care for transgender people is now, wrote Drs Gorton and Berdahl.2 “ED personnel will need to work for decades to gain the trust of transgender patients who are familiar with stories of transphobic incidents in the ED.”