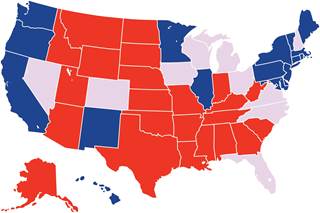 Socioeconomic variables associated with the opioid epidemic were predictive of voting patterns during the 2016 US Presidential election.

Socioeconomic variables associated with the opioid epidemic were predictive of voting patterns during the 2016 US presidential election, according to research published in JAMA Network Open. Support for Republican candidate Donald Trump was “a marker for physical conditions, economic circumstances, and cultural forces associated with opioid use.”

Researchers sought to map the correlation between chronic opioid use and voting in the 2016 presidential election by county to more fully understand the opioid crisis. James S. Goodwin, MD, of the University of Texas Medical Branch Sealy Center on Aging and colleagues noted that a number of studies have described the characteristics of certain counties with high opioid use, and that the geographic distribution of opioid use uncovered through these studies has shown similarities to the results of the 2016 presidential election.

To explore this overlap, Dr Goodwin and colleagues conducted a cross-sectional analysis encompassing demographic and economic measures at an individual and county level and the 2016 presidential vote results in each county. Chronic opioid use was measured as a 90-day or greater supply of opioids prescribed in 2015.

Researchers used 3 regression models with the adjusted county opioid rate as the dependent variable. The first model included only percentage of county vote for the Republican candidate, the second adjusted for county demographics, and the third added whether each state had any of 7 categories of laws that regulate the prescribing of opioids.

The researchers found that chronic use of prescription opioids was correlated with support for the Republican candidate in the 2016 presidential election. In 693 counties with opioid prescription rates that were “significantly higher” than the mean county rate, the mean Republican presidential vote was 59.96%, compared with 38.67% in the 638 counties with significantly lower rates.

Dr Goodwin and colleagues noted that this association was related to underlying socioeconomic characteristics including income, unemployment, insurance coverage, and disability. These findings support those of other studies on presidential election results and their correlation with use of drugs and alcohol, overall low health, and life expectancy across US counties.

”Public health policy directed at stemming the opioid epidemic must go beyond the medical model and incorporate socioenvironmental disadvantage factors and health behaviors into policy planning and implementation,” the researchers concluded.