International C-Section Outcomes: The "C" Is Not for Certainty 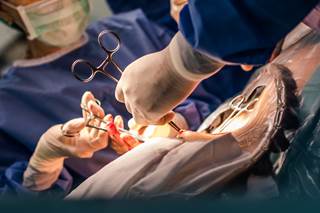 It's entirely possible that we are performing too many cesarean sections, and doing our patients a grave disservice in the process.

MacBeth must have believed that he was more or less untouchable. After all, the friendly neighborhood witches had promised that nobody "of woman born" could harm him. So I can only imagine how crestfallen he must have been when he realized that MacDuff was "from his mother's womb, untimely ripped." The only people who posed a threat to him were ones born by cesarean delivery (C-section). And, really, what were the odds?

I don't know how things were back in Shakespearean times, but it turns out that these days, at least in America, the odds are just about 1 in 3.

There are a few quick and dirty ways to work out whether that assumption is actually warranted. One way is to look at how indicators of maternal and fetal health change with the C-section rate. Unfortunately, the difficult-to-assess effect of patient comorbidities, socioeconomic status, and other confounding factors probably make this approach more dirty than quick, but the best estimates suggest that on average, C-section rates up to 19% were associated with lower maternal or neonatal mortality.4 That analysis focused on nation-level data, and although it did its best to account for intercountry differences in expected health outcomes, its conclusions were inevitably painted in fairly broad strokes. Even though our C-section rate clearly stretches well past the supposed point of diminishing returns, it's not at all obvious that it's reasonable to apply the same standards to both the American healthcare system and that of, say, Afghanistan.

As it happens, concentrating on the C-section rates from nations that are closer to our peer group hints at a more complicated picture. Some countries, such as Sweden (17% of births by C-section), came in well below our frequency; others, such as Italy (25%) and Canada (27%),5 were within shouting distance of the American number. Still others, notably Germany (37%) and Brazil (56%, eclipse even our allegedly worrisome rate.6,7 All told, 1 in 3 feels high, if not necessarily outrageous. But to my eye, the more impressive finding was the incredible variation in C-section rates from country to country.

In an irony fit for the Bard himself, heterogeneity turns out to be the only constant in C-section data. No matter what magnification you use to examine the numbers, and there have been studies that compared countries, states, hospitals, and even individual doctors, you'll find an unruly mess of data points, including outliers flung far to either side of the mean. Louisiana's C-section rate, to take one example, is 64% higher than New Mexico's.8 The reason for such profound and consistent variance isn't intuitively obvious, at least at first. Patient groups can certainly diverge in terms of demographics, parity, or any number of other differentiators, but to the extent that these characteristics drive differences in C-section rates, you'd surely expect the effect to disappear by the time you compared rates among hospitals in the same Zip code. Yet somehow it doesn't.

Something wicked this way comes?

C-sections are an object lesson in the hazards of making medical decisions under what economists refer to as conditions of uncertainty. We know at the outset that there's a chance that any given pregnancy will end in delivery by C-section. But since we don't have a strong grasp on what or how external factors conspire to make C-sections more likely, we can't confidently say what that probability truly is for any given patient. As a result, we're forced to make judgments under uncertainty.

Decision making under uncertainty can be tough sledding, especially when we're trying to make a diagnosis or decide what procedure our patients should get. Uncertainty in this case is fueled by the fact that the value (and potential costs) of a C-section depends critically on the patient, the doctor, and the particular circumstances under which the procedure is to be performed. More than that, outcomes of the procedure are both personalized and subjective. It's difficult, if not impossible, to tell ahead of time how much postoperative pain the patient will endure, what her recovery course will look like, or how much performing a C-section will increase the likelihood of experiencing complications or requiring future C-sections. There are too many nebulous variables to make precise, much less accurate, a priori judgments. The best we can do is guess, and hope for the best.

"If chance will have me king, why, chance may crown me."

This haze of uncertainty leads directly to the variability we saw earlier.9 Conditions of uncertainty have been shown to leave practitioners less equipped to accurately evaluate the actual consequences of any given intervention, a problem that is insidiously compounded by the inherent inability of anecdotal evidence to identify and disabuse misguided notions. The unfortunate consequence is that physicians' decisions under uncertainty will often hew closer to arbitrary than to any optimized set of practice guidelines. In that light, significant variability C-section rates is almost inevitable.

It's entirely possible that we are performing too many C-sections, and doing our patients a grave disservice in the process. But before we can hope to intelligently or effectively address that question, we need to find our way through the fog of uncertainty that clouds our understanding of what an acceptable rate of C-sections even is, and how best to get there. Until then? "Confusion now hath made his masterpiece."