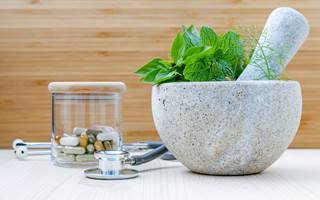 Although most studies on NDS have been small and more research is needed, there is the potential for some NDS to eventually be included in the rheumatology toolkit.

Patients with musculoskeletal disorders tend to use complementary and alternative medicine modalities at a higher rate compared with patients with other conditions. According to a recent literature review published in Arthritis Care & Research, 47% of patients with rheumatoid arthritis (RA) use natural-product dietary supplements (NDS), but only 70% disclose this to their healthcare providers.1

The review was undertaken by Janel C. DeSalvo, MD, and other researchers from the University of Arizona to examine population-based patterns of NDS for the self-management of RA. The authors uncovered relevant articles with a systematic search of Ovid/MEDLINE, CINAHL, the Cochrane Library, and other databases of the medical literature. Twenty-three studies met the study's inclusion criteria, which included the requirement that a minimum of 50% of research participants in a data set be diagnosed with RA. For the purposes of the review, NDS was defined as “non-mineral, non-vitamin, ingested natural product-derived substances use.”

Results showed that marine-derived oils, glucosamine, chondroitin, vinegar, garlic extract, and green-lipped sea mussel extract were the most frequently reported supplements among patients with RA. Certain geographic patterns were in evidence: patients with RA in Japan were heavier users of bee-derived supplements, whereas the use of green-lipped sea mussel extract was reported only in Australia, Ireland, and the United Kingdom. The review authors noted that the apparent preference for different supplements may also be influenced by temporal patterns, with various supplements falling in and out of favor. Turmeric, for example, is rising in popularity because of its reported anti-inflammatory activity, so the degree to which it is used today by patients with RA may not be reflected in older studies.2 The authors noted that among the most frequently-used supplements, marine-derived oils have the best evidence for efficacy.

Among patients reporting NDS use, 47% perceived them to be effective and 13% reported adverse reactions such as belching, gastrointestinal upset, itching, swelling, increased pain, headaches, or low stamina.

“NDS use in an RA population could have particularly significant consequences; a high potential for drug-NDS interactions exists given the intensive pharmaceutical management of this population, for both RA itself and for common associated comorbidities such as cardiovascular disease,” wrote Dr DeSalvo and coauthors. NDS was used concurrently with prescribed anti-RA medications in 91% of NDS users. Although it remains unknown how NDS interact with commonly-used RA pharmacotherapies, adverse interactions with other drugs have been noted for glucosamine, marine oils, and certain other supplements.

Review coauthor Janet Funk, MD, FACP, professor of medicine at University of Arizona, told Rheumatology Advisor that it is important that physicians be aware of everything patients being treated for RA are taking when assessing therapeutic responses and side effect profiles of prescribed medications. “It is important to inquire about supplement use and to do so in a nonjudgmental fashion,” she noted. “If problems arise, it can be helpful to examine the labelling information of the specific product used. If benefits seem to have accrued, this information can also be helpful, given the large array of seemingly similar products that are available in the marketplace. It is also important to educate patients and let them know that ‘natural' is not synonymous with ‘safe' and that NDS can have both risks and benefits, just as with medications.” Dr Funk and colleagues recently reported on a case of autoimmune hepatitis in a patient whose medical records documented the 15 medications she was using, both over-the-counter and prescribed.3 However, her records did not indicate that she was also taking the NDS turmeric. Two months after being diagnosed with autoimmune hepatitis, the patient read about turmeric-induced hepatitis and ceased using the supplement, leading to a resolution of the condition. Because her providers were not aware of everything that she was taking, they did not consider that NDS could be causing her symptoms.

Dr Funk said that although a huge array of NDS are available for sale in the United States, only a handful account for most use in RA at any given time, making it possible for rheumatologists to maintain general knowledge in this area. Fact sheets with information about different types of supplements can be accessed here.4 More detailed information is available from databases such as the Natural Medicine Comprehensive Database here,5 and from Cochrane reviews.

Katarzyna Gilek-Siebert, MD, director of the rheumatology fellowship program at Roger Williams Medical Center in Providence, Rhode Island, told Rheumatology Advisor that some patients may be reluctant to disclose their NDS usage because they may be dissatisfied with conventional medicine and fear that their physician would disapprove of their stance. “Patients who align with a more holistic approach may presume that their provider won't be positive or even knowledgeable about alternative approaches,” she stated. Dr Gilek-Siebert was not involved in the review.

Dr Gilek-Siebert noted that although most studies on NDS have been small and more research is needed, there is the potential for some NDS to eventually be included in the rheumatology toolkit. “Unfortunately, we really don't have perfect therapy for RA. When you see the day to day suffering of patients it's clear we need to look in many directions, and more research into alternative remedies is one of them.”