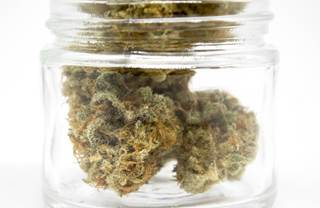 Single-dose inhaled vaporized cannabis to alleviate breathlessness and improve exercise tolerance in adults with advanced chronic obstructive pulmonary disease (COPD) had no positive or negative clinical effect on airway function, according to a study published in the Annals of the American Thoracic Society.

The randomized, double-blind crossover study recruited 16 symptomatic adults aged 40 years or older with advanced COPD from the Montreal Chest Institute. The participants received 35 mg inhaled vaporized cannabis or 35 mg of placebo control cannabis over 2 intervention periods with a washout period in between. All patients were evaluated for lung function, general health status, and anxiety/depression. The effects of vaporized cannabis or placebo on the patient's physiological and perceptual responses were captured through cardiopulmonary cycle endurance exercise testing, impulse oscillometry at rest and spirometry measures, and assessing cognitive function, psychoactivity, and mood.

Study findings indicated no significant effect of vaporized cannabis vs placebo. The breathlessness intensity rating during exercise at isotime was 2.7±1.2 Borg units for cannabis and 2.6±1.3 Borg units for placebo; the exercise endurance time for cannabis was 3.8±1.9 minutes and 4.2±1.9 minutes for placebo. Secondary outcomes, including cardiac, metabolic, gas exchange, ventilator, breathing pattern and lung volume parameters — measured both at rest and during exercise — similarly showed no significant effect of cannabis vs placebo. Clinically meaningful results for pulmonary function at rest, psychoactivity, mood, and cognitive function were also null.

The authors suggested the lack of effect of inhaled vaporized cannabis may be due to the preparation of cannabis, which was devoid of other cannabinoids that could have facilitated a bronchodilator effect in previous studies, despite using a comparable dose. It may also have been due to the delivery of cannabis, in which shallower inhalation and shorter breath-holding diminished potential therapeutic effects. In addition, lungs in adults with COPD have structural abnormalities that may account for limited delivery of vaporized cannabis into the airways.

One limitation of the study included a small sample size. Due to a modest effect on psychoactivity, future trials should utilize cannabis preparations that do not affect psychoactivity. In addition, 75% of the participants recognized a difference between cannabis and placebo treatments, indicating that a placebo with the same taste and smell should be used in the future. Further studies are needed to assess the potential effectiveness of cannabis as an adjunct therapy for COPD.