Why Did Nearly 1 in 10 Infants Not Receive Vaccinations in 2016? 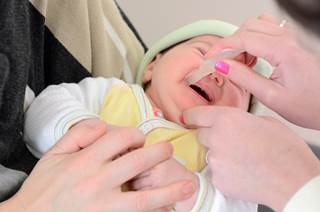 The report also reveals inequalities in childhood immunization coverage in low- and middle-income countries over the past 10 years.

The most recent immunization estimates from the World Health Organization and UNICEF show that 12.9 million infants worldwide did not receive any vaccinations in 2016.1 Additionally, an estimated 6.6 million infants who did receive their first dose diphtheria-tetanus-pertussis (DTP)-containing vaccine did not complete the full, 3-dose DTP immunization series (DTP3), putting them at serious risk of developing potentially fatal diseases.

The WHO report, State of inequality: Childhood immunization, found that the percentage of children who received their full course of routine immunizations has stalled at 86% (116.5 million infants) since 2010. This falls short of the global immunization coverage target of 90%.

The new data show that 130 of the 194 WHO Member States have achieved and sustained at least 90% coverage for DTP3. However, an estimated 10 million additional infants need to be vaccinated in 64 countries, if all countries are to achieve at least 90% coverage.  A total of 8 countries in 2016 had less than 50% coverage with DTP3, including Central African Republic, Chad, Equatorial Guinea, Nigeria, Somalia, South Sudan, Syrian Arab Republic and Ukraine.

"Most of the children that remain un-immunized are the same ones missed by health systems," says Dr Jean-Marie Okwo-Bele, Director of Immunization, Vaccines, and Biologicals at WHO. "These children most likely have also not received any of the other basic health services. If we are to raise the bar on global immunization coverage, health services must reach the unreached. Every contact with the health system must be seen as an opportunity to immunize."

The WHO found that 85% of children have been vaccinated with the first dose of measles vaccine by their first birthday through routine health services, and 64% with a second dose. A total of 152 countries now use rubella vaccines, and global coverage increased from 35% in 2010 to 47% in 2016. Recently-recommended vaccines by the WHO include those against major killers of children such as rotavirus and pneumonia.  Vaccination against both these diseases has the potential to substantially reduce deaths of children under 5 years of age.