Protectionism of In-House Radiologists at Hospitals in the United States 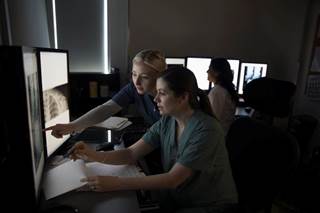 X-ray, computed tomography, and MRI images can be transmitted, instantly and for negligible cost, to any corner of the globe.

Without exception, radiologists are my favorite people in the world. They invariably serve as a smiling beacon of calm in an otherwise rough-and-tumble world. They've redefined the possible by simultaneously utilizing multiple computer screens. They consistently manage to impose a patina of certainty over the chaos that defines the diagnostic process. And, most important, they perform a vital task, and do it much more effectively than I could ever hope to. They're the best.

But I'm not entirely sure why those jobs still exist in the United States, at least in their current form. Even as industry after industry has been overtaken by a wave of outsourcing to international markets where labor is cheaper, more efficient, and more flexible, medicine has remained obstinately tethered to its traditional way of doing business. There are mostly  good reasons for this. I'm guessing, for instance, that patients usually still want their surgeon to be in the same room as they are during an operation.

But radiology, at least in theory, is different. Thanks to the magic of the internet, X-ray, computed tomography, and MRI images can be transmitted, instantly and for negligible cost, to any corner of the globe. The images are typically read without regard for clinical context, so proximity to the patient doesn't matter too much. Characteristic anatomy is, of course, the same everywhere. And since English is the lingua franca of medicine throughout much of the world, there are likely tens of thousands of international radiologists who are perfectly capable of composing clear and intelligible reports.1 It's a little puzzling. Since when do we not use all the resources at our disposal to help our patients?

The reason for this enigma, of course, is our protectionist insistence that every physician who participates in any aspect of patient care be accredited (and, ideally, physically located) in the United States .2 As it happens, though, the objections to offloading more work to international radiologists are mostly just straw men. Malpractice litigation concerns could easily be mitigated by appropriate insurance coverage. Likewise, suggestions that this rule protects patient safety don't really hold water. For one thing, international radiologists are already accredited under the standards of their home country, which are unlikely to be much less rigorous than ours. But even if that weren't the case, it would be trivial to institute an exam testing the competence of offshore radiologists and form a committee or independent group responsible for auditing practitioners who persistently submitted substandard work. And while we're here, it's probably worth pointing out that the idea that an international radiologist is somehow unfit to read scans of American patients is certainly xenophobic and maybe even out-and-out racist. Actually, come to think of it, I hope that the true reason for these rules is just economic protectionism.

Protectionism in the face of expanding globalism is inevitably followed by knock-on effects,3 the most obvious of which is a drain on our financial resources. The average radiologist in India, for example, is paid less than one-fifth of the American equivalent.4  Even accounting for increased compliance and insurance costs, it's reasonable to expect that a hospital would be able to hire several international radiologists for the price of a single domestic radiologist. Those extra costs, of course, would invariably trickle down to patients.

Which is unfortunate, but, if I'm being honest, I have no problem with how much American radiologists make. They're smart, they work hard, and this is still America, last time I checked. That said, if we're going to employ such an expensive resource, we should take full advantage of its value. My concern is that protectionist policies, by forcing American workers to compete for tasks that could be performed at a discount elsewhere, compel us to ignore our comparative advantages. The comparative advantage of in-house radiologists is obvious: their close proximity to patients and colleagues. Any economically, or medically, optimized system would unquestionably leverage that proximity for all that it's worth. There are even some straightforward ways to move toward this ideal: encourage radiologists to round with emergency department, internal medicine, and surgical teams; carve out dedicated time for radiologists to teach their colleagues from other specialties how to interpret scans, and create incentives to encourage radiologists to examine patients and incorporate the clinical context into their reads. The expertise of in-house radiologists might be expensive, but it's also a gift — and we'd be remiss not to take advantage of it.

Some of this is already happening. Radiologists have dramatically expanded their interventional practice (much to the chagrin of surgeons, but probably to the benefit of patients), and periodic “tumor boards” are an excellent example of fruitful, and impossible to outsource, multidisciplinary collaboration. But, we've only just scratched the surface of what American radiologists can offer to patients. Why should we be content to stick them in a room and make them read scans all day? I'll tell you one thing: that's no way to treat my favorite people.