Severity of Health Care Attacks in Syria Reported by WHO 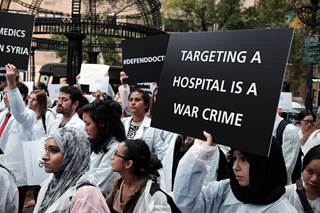 A total of 938 people were directly harmed in 402 incidents of violence against health care in Syria.

HealthDay News -- According to an article published in The Lancet, results from a real-time reporting tool have shown the impact of attacks on health care services in Syria.

Mohamed Elamein, PhD, from the World Health Organization Gaziantep Field Office in Turkey, and colleagues describe a system used mainly in areas of Syria to detect and verify attacks on health care services.

All Turkey health cluster organizations with a physical presence in Syria were asked to participate in the Monitoring Violence against Health Care alert network.

The researchers found that 938 people were directly harmed in 402 incidents of violence against health care between early November 2015 and December 31, 2016: 72 and 28% were wounded and killed, respectively.

Adult males comprised 68% of the dead; the highest case fatality (39%) occurred in children aged younger than 5 years. About one-quarter (24%) of attack victims were health workers.

Attacks were experienced by about 44% of hospitals and 5% of all primary care clinics, mainly in areas with a substantial presence of armed opposition groups.

The main form of attack was aerial bombardment. One-third of health care services were hit multiple times. Compared with other services, those providing trauma care were more often attacked.

"Reliable data are essential to show how far warring parties have strayed from international law protecting health care in conflict and to effectively harness legal mechanisms to discourage future perpetrators," the authors write.