Should Foreign Language Fluency Be a Required Competency for International Medicine? 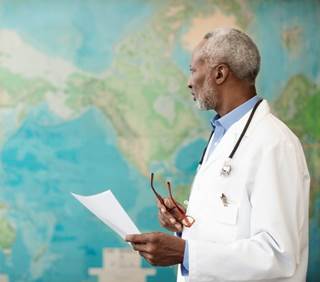 The world needs doctors, no matter what language we speak, because the people you'll be helping out will be more than grateful to even be seeing a doctor in the first place.

Physicians are, by nature, compassionate and altruistic people, or we're supposed to be anyway. So when a chance comes up for us to travel to a developing nation and offer medical assistance, it's not surprising that many of us would be more than happy to go.

However, foreign lands come with foreign languages, and more likely than not, we will not be fluent in them. Don't get me wrong: those who speak fluent Spanish, for example, do incredible work in parts of Latin America and other Spanish-speaking countries in the Caribbean. But is it a requirement for physicians who want to assist those living in countries that speak a different language? The short answer is: No.

During medical school, a group of us traveled to Haiti as part of an organization based in New York City to provide medical assistance to those living in Fort Liberté, a city north of the capital. Although I was able to speak and understand Haitian Creole quite fluently, the majority of those who I accompanied did not speak a word of it, but that didn't stop them from going to help.

It's true that a language barrier will pose significant burdens in the physician-patient relationship, but there are ways to overcome this issue. There might not be fancy translator telephones in these developing countries, but here are some ways you can overcome these language barriers when practicing medicine in foreign lands:

● Learn the basics. Before we went to Haiti, we were required to go through a few Haitian Creole language courses just to get a feel of how it sounds. Obviously, I didn't need to learn a language I already knew, but I was in a great position to help my colleagues who actually did need to learn. Before you head out to save some lives, learn the basic medical terminology that will most likely come up during a patient interaction. Learn how to ask the basic questions, such as: "How are you feeling?" "Where does it hurt?" "What brings you to the doctor today?" etc. These simple questions are easy ways to get a patient encounter started. Most often than not, the patients will assume you don't understand them anyway and will use hand gestures to convey their points.

● Bring some translators. It's important to know how to say the basic things in the language you'll be surrounded by, but to really understand your patients' needs and come up with an accurate diagnosis and treatment plan, it's going to need a lot more than a few introductory questions and some hand gestures. That's why it's important you have a few fluent translators on board. Not only will you be able to understand the complete concerns of your patients, but they'll be able to help describe to them your recommendations and medical advice. However, be cognizant of your translator's medical knowledge, and ask them to translate everything in layman's terms as to avoid any confusion or misinterpretation of any medical advice.

● There's an app for that. Just when you thought smartphones couldn't get any smarter, they just did. Check out the surplus of translator applications available for download. Just because you're traveling to a developing country with limited technology and resources, it doesn't mean you can't bring some tricks from home. Launch the app, speak into the microphone, and let it do the work for you. Your patients will probably really enjoy using your telephone too, and it will undoubtedly strengthen the physician-patient relationship.

It's easy to become intimidated by a difference in culture when visiting foreign countries because it's human nature. We become so wrapped up in the idea that we won't be of any service because they'll never be able to understand us. But we're all in this career path for a reason, and it's to help people. The world needs doctors, no matter what language we speak, because the people you'll be helping out in these countries will be more than grateful to even be seeing a doctor in the first place.

At the end of the day, it doesn't really matter which language you speak, or which language they speak. We're all human, and believe it or not, we're a lot more similar than we've ever been different. So pack your bags, put on that white coat, and do some good, Doc.