Examining the Crisis of Physician Suicides: Then and Now 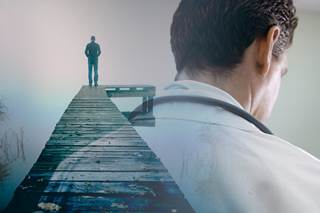 Dr John Gerald (Gerry) FitzGerald was one of those admirable-bordering-on-irritating overachievers. He turned up at medical school in 1899 — just 16 years old — and completed multiple internships at an age when less precocious boys were still learning how to shave.

By all accounts, Dr FitzGerald dazzled during his residency. Not content with merely being a big fish in Johns Hopkins' big pond, he soon returned to his native Ontario with the audacious goal of revolutionizing public health in Canada. He came close. A misleadingly short list highlights some of his professional triumphs: manufacturing Canada's first rabies vaccine; establishing a laboratory that produced diphtheria, smallpox, and typhoid vaccines for the Allied forces in World War I; and laying the groundwork for what would become Canada's health insurance program. I can't even begin to try and count the number of lives Dr FitzGerald is responsible for saving.

As he neared his 56th birthday, Dr FitzGerald began complaining of intractable insomnia, migraine headaches, and a bleeding ulcer — each caused by decades of pathological overwork. A few months later, he swallowed a handful of pentobarbital in an attempt to take his own life.1

Dr FitzGerald's story is close to 80 years old, but still rings true today. Suicide among physicians is a staggering public health crisis that has gone largely ignored. I'm not using the term “crisis” rhetorically here: every year, suicide takes the lives of close to 400 physicians,2 and takes medical care from as many as 1 million patients.3 These trends have been obvious since at least the middle of the 19th century3 — well before Dr FitzGerald's time — yet the rate of physician suicides still outpaces that of the general population by a factor of somewhere around 3.4

It's hard to say precisely what that figure truly is. Suicides are notoriously hard to count, often forcing us to divine the inscrutable intentions of the departed. In the case of physicians, who could blame grief-stricken colleagues for hesitating to label borderline cases as self-inflicted? The cognitive dissonance alone is enough to give pause; there but for the grace of God go us all. Experts generally agree that suicides are probably underreported, but by how much is an entirely different matter.

If quantitative uncertainty prevents us from wrapping our arms around the magnitude of the epidemic, its proximate cause stares us in the face. Doctors struggle with depression with alarming regularity. Resident physicians, for example, are 4 times as likely to have a major depressive episode than other people of the same age.5 Although it's well known that unaddressed psychiatric conditions are a critical contributor to eventual suicide, depressed physicians are also relatively unlikely to seek out mental health care — whether because of perceived stigma, fear of broken confidentiality, or another reason beyond our recognition.3 Again, the dead aren't around to answer our questions.

Epidemiologists have settled on a handful of cultural factors that seem to have something to do with suicide rates.6 Some of these don't appear to implicate the medical community particularly one way or the other. There's no good reason, for instance, to think that physicians have an unusual preference for stability and predictability, or that the profession is especially stratified by status, finances, or other social factors. Likewise, physicians are reputed to place a high value on achievement and competitiveness — cultural traits that tend to be associated with lower suicide rates.7 On the other hand, even as we strive to climb out of our silos and toward a more connected and collaborative future, the nature of the job continues to cast physicians as rugged individualists. This perception stretches back even before the days of Dr FitzGerald. Physicians play the role of the decider and are acutely aware of the responsibility that implies. The buck stops here — along with the stress, the guilt, and the associated mental illness.

Sadly, groups with a well-developed sense of individualism — that is, the self-perception of autonomy — tend to experience higher incidence of suicide. The relationship isn't iron clad (taken together, these cultural characteristics explain only about half of the variation in suicide rates), but it's still instructive. When a young physician fails to seek help for her depression because she doesn't want to appear weak, she's exhibiting individualistic qualities. When Dr FitzGerald worked himself to the bone in a singular effort to remake Canadian public heath, he was acting individualistically. Likewise, when the American Medical Association implores hospitals to create support systems for at-risk physicians,8 the organization is trying to loosen the grip that individualism holds on the profession. The choice is clear: heal together or die alone.

Dr FitzGerald's suicide attempt put him in a coma. Following his recovery, he spent the next year or so struggling through a harrowing rehabilitation experience at a private sanatorium in Connecticut that included dozens of insulin shock treatments, but little or no opportunity to talk to psychiatrists, contextualize his professional contributions, or build a stronger connection with his community at large. It's hardly surprising that his supposed recovery was followed by a second overdose, and then a third and final suicide attempt.

“My grandfather's death certificate states that he died of a duodenal ulcer four days [after his second overdose]. It was only in 1996…that I learned the true details of his death, suppressed for over half a century…. As my grandfather lay recovering from a toxic drug overdose at Toronto General Hospital, a nurse placed a tray of food on his lap. When she withdrew, he grasped the knife and, marshalling the stoic willpower of his Irish Protestant forefathers, he felt for the femoral artery in his thigh, and stabbed his flesh again and again. In less than five minutes, John Gerald FitzGerald was dead. A life of self-sacrifice was over. He was 57.”