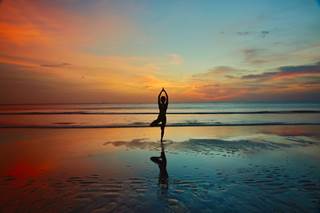 Mind-body therapy is an approach to healing and easing life’s problems by increasing resilience and personal resources.

The application of yoga as a therapeutic intervention began early in the 20th century and “takes advantage of the various psychophysiological benefits of the component practices.”3 Today, meditation techniques (eg, the use of mantra to elicit the “relaxation response”4,5 and the introduction of mindfulness6,7) have an ever-growing evidence base to support their use and have become increasingly accepted in Western medicine as helpful adjuncts to other therapies.

Yoga is a component of “mind-body therapy (MBT).” Sometimes called “integrative psychiatry,” it is “an approach to healing and easing life's problems by increasing one's resilience and personal resources.”8 MBT “incorporates the fundamental principles of traditional psychotherapy and holistic medicine to promote healing on all levels: emotional physical, mental and spiritual” and aims to create a healthy alliance between mind and body to enable patients to manage stress and create a healthy lifestyle.”8

“You can think of mind-body practices as ‘bottom-up',” Dr Gerbarg said. “Most of the techniques in which psychotherapists are trained, such as cognitive therapy, are ‘top-down,' a process that begins with thinking or some type of cognitive or verbal approach that works its way down.” In contrast, “mind-body practices begin with the body, with the sensations generated by sensory receptors, proprioceptors, chemoreceptors, and signals that then go back up to the brain,” she explained.

Both bottom-up and top-down approaches are involved in physical and mental health, she continued. “We often have a situation in which using primarily a cognitive or top-down process may not resolve an issue. But it is possible that by adding a bottom-up process, the system can be shifted in the right direction.”

Yoga and the Autonomic Nervous System

The autonomic nervous system (ANS) maintains automatic functions, including respiratory, cardiovascular, and glandular activities and also plays a role in positive social behaviors.9 The ANS has 2 main branches: the sympathetic nervous system (SNS) and the parasympathetic nervous system (PNS). The SNS has a “behavioral activation” component, increasing adrenaline and glucocorticoids in preparation to fight or flee, but once the threat has passed, the SNS quiets down and the PNS steps in to slow respiration and heart rate, restore resting patterns of blood flow, rebuild energy reserves, and reduce inflammation.9

“Dysfunction and imbalances in the ANS — especially overactivity in the SNS — are associated with anxiety disorders, depression, posttraumatic stress disorder (PTSD), and other conditions.  Most medications we use in psychiatry — including anxiolytics, antidepressants, and even antipsychotics when used for calming — will dampen the overactivity of the SNS,” Dr Gerbarg explained.

However, she noted that these agents do not increase the activity of the parasympathetic component. The result is that the sympathetic may be relatively overactive, while the parasympathetic is underactive and unable to restore balance to the system. “It is the PNS that must be activated for people to feel calm and safe,” said Dr Gerbarg, who is the coeditor and a chapter coauthor of Complementary and Integrative Treatments in Psychiatric Practice (American Psychiatric Association Press, 2017).

Page 1 of 3
Recommended for you
Related Topics