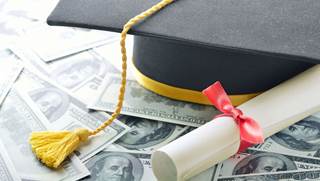 Student debt is a concern in the US overall, with college costs increasing at a higher rate than inflation for decades now. The rateof tuition increase for medical schools has exceeded other areas of graduate education. Student loan indebtedness has risen right along with college costs,with the median debt at $170,000 for medical school graduates in 2012,according to the Association of American Medical Colleges. They report that nearly 90% of medical students graduate in debt.

Medical School Tuition: Then and Now

Besides dedicating many years of your life to study and delaying your entry into the full-time, fully paid workforce,there are additional sacrifices when you choose a medical career. Spending and/or borrowing money for tuition and living expenses (through medical school and residency) creates significant stress and anxiety about the future. And there are even more costs as you begin your career. You'll likely be payingback student loans while also dealing with costs for licensure, sky-high malpractice insurance premiums, and more. You may even be setting up your own practice with all the overhead costs entailed, including medical and office staff, office space, and more.

What's more, because the Affordable Care Act is still in flux, it's impossible to predict what the health insurance landscape for your future patients will become by the time you graduate. Any changes that will be made to it (and the effects of those changes) are not yet clear. All these obstacles and uncertainties can cause a college student to reconsider his or her chosen career entirely, or to at least choose one of the higher-paying specialties.

Major Effects of Incurred Debt on the Medical Profession

Shortage of primary care physicians: Many medical students choose their specialty based, in part, on the cost of schooling and specialty training. They also look at what they might be paid after they graduate. High costs and relatively low pay have resulted in fewer students choosing family medicine. In just 10 years, the UScould have a deficit of about 50,000 primary care doctors, according to the American Academy of Family Physicians.

Job dissatisfaction: CBS News'Money Watch recently reported that primary care physicians (pediatricians and family and internal medicine physicians) canexpect to earn little more annually than the amount of their medical school debt, based on an analysis of data from the Association of American Medical Colleges, George Washington University,and Medscape by Nerd Wallet. They also reported that internal medicine physicians are the least happy with their career choice.This is attributed to relatively long hours and low salary, combined with limited time with patients and excessive paperwork, none of which make iteasier to repay student loans with payments of $1000 to $3000 monthly.

Which Medical Specialists Are Best Paid and Most Satisfied?

According to the Nerd Wallet analysis, the most highly paid doctors are orthopedic surgeons, who take home an average of $405,000 per year. Cardiologists reported an average salary of $357,000 annually while working the longest hours,at 60 per week. Neurologists reported earning an average of $216,000 and working about 55 hours weekly, with good job satisfaction. More than half (60%) would choose the same specialty. Oncologists were also generally satisfied with their specialty, with about 60% who say they would choose oncology if they could do it all over again.

Dean Robert Alpern of Yale University stated that tuition costs cannot be expected to decrease anytime soon, so more endowments are needed to help students bear the costs. The dean stated that he would like to have a tuition-free medical school, but that such an accomplishment would be difficult to achieve.

Practical Solutions: What You Can Do Now to Afford Medical School

Pay off loans with service: Get full or partial college loan debt forgiveness by agreeing to work in under served or rural areas for a few years through the National Health Service Corps Scholars Program. In other loan repayment programs, you agree to work in primary care or earn debt forgiveness through research work. State universities may have similar programs.

Go abroad: Go to a quality medical school in the Bahamas or elsewhere. Some foreign schools qualify for federal loans and may offer accelerated programs. Check to be sure they have a high pass rate for the USMLE. Remember that travel back and forth to see relatives, and your living expenses, must be factored in. Consider also that when you return, you may need an ECFMG certification, must pass the USMLE, and need to compete for US medical residencies.

Move to another state for medical school: If you live in a state with a good program (or are open to relocating), you can get a good deal on your education for your chosen medical degree if you're accepted. To become a resident, you have to live in the state for at least a year or more (varies by state). The University of North Carolina at Chapel Hill was rated #2 in the nation by U.S. News' Best Grad Schools for primary care medicine. It has a comparably low tuition of about $17,500 (state residents), although it's $44,500 fo rout-of-state students. That doesn't seem like such a bargain considering that annual tuition is a mere $8300 at the University of Massachusetts (approximately,for in-state students only), ranked #5 for primary care. For U Mass,however, you must have lived in the state for 5 years and/or attended high school there.

Join the military: Tuition is free at the F. Edward Hébert School of Medicine at the Uniformed Services University in Bethesda, MD. One of the caveats, of course:you must commit to service in the military.

Join the Peace Corps: Former med students with loan debt can be awarded funds to reduce their debt or have part of their debt cancelled in exchange for Peace Corps volunteer services. A new travel fellowship, a type of “Peace Corps for doctors,” that pays off school loans at about $30,000 per year of service (for qualified individuals) was recently created by Dr. Vanessa Kerry of Massachusetts General Hospital's Center for Global Health.