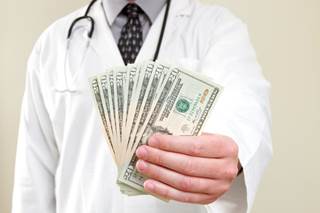 Male physicians in the United States receive higher general payments from the biomedical industry and are more likely to hold ownership interests in such companies compared with female physicians, according to a study published in JAMA Internal Medicine.

Kathryn R. Tringale, MAS, and Jona A. Hattangadi-Gluth, MD, of the University of California San Diego, analyzed all physicians in the 2015 Centers for Medicare & Medicaid Services National Plan & Provider Enumeration System database linked with 2015 Open Payment reports of industry payments, including general payments and ownership interests. The data were aggregated by specialty and payment outcomes were compared between male and female physicians. The authors also conducted a subset analysis of all licensed practitioners in California to determine whether years in practice was a potential confounder.

The investigators also found that men held 93% of the value received from ownership interests and received a higher per-physician value across most specialties. The largest difference occurred among radiologists ($5568). However, in certain fields, including obstetrics and gynecology, psychiatry, and urology, women held higher values of ownership interests compared with men. The greatest difference was in obstetrics and gynecology ($1061).

The authors discussed a number of possible explanations for the differences in general payments and ownership interests between men and women, including recent data that suggest that female physicians bear a greater proportion of the child-rearing obligations compared with male physicians, affecting the number of hours available to pursue biomedical industry work. The authors also note that women may negotiate less frequently for payments, or that biomedical companies may offer women physicians lower payments. Biomedical companies may also be more likely to target male physicians for product development or ownership.

Controlling for the number of years of practice did not alter the results of the study. The authors noted that there were several limitations, including the inability to account for certain potential confounders not included in the National Plan & Provider Enumeration System, such as age or race and ethnicity.