Does Right to Try Legislation Improve on Existing Compassionate Use Programs? 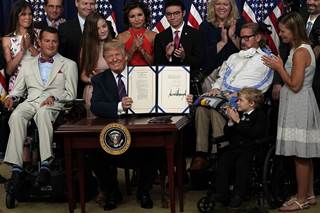 Numerous diseases — amyotrophic lateral sclerosis, glioblastoma, Huntington disease, multiple sclerosis, and certain cancers, to name a few — come with challenging prognoses and limited therapies. Unlike with cardiovascular illnesses, which affect millions of Americans, the monetary incentives to develop treatment options for some of these rarer conditions are lacking because of the overall low incidence of those diseases. When pharmaceutical companies do invest in drug development for a terminal illness, access to those drugs may be limited for years because of regulatory reviews and clinical trials that are required by the US Food and Drug Administration (FDA), primarily to ensure the safety and efficacy of those drugs. For some patients, that delay may mean that a potential treatment won't make it to them in time to alter the natural course of their illness.

On May 22, 2018, Congress passed the Right to Try Act of 2017; it was signed into law on May 30 by President Trump.1 The ceremonial signing was celebrated by the President, who claimed that the law would save “hundreds of thousands” of lives. “We're going to be saving tremendous numbers of lives,” President Trump boasted.2 The legislation allows patients, physicians, and pharmaceutical companies to bypass FDA oversight and provide unapproved investigational drugs that have passed phase 1 clinical trials successfully to patients who have no other treatment options and who are unable to participate in clinical trials. The bill further “limits the liability of a sponsor, manufacturer, prescriber, or dispenser that provides, or declines to provide, an eligible investigational drug to an eligible patient in accordance with the bill.”1

If you have ever cared for a patient — or even a family member — with a terminal illness, improving access to investigational drugs may, at first glance, seem like a godsend. But, is it really? The FDA currently approves 99% of expanded access requests.2 The rhetoric surrounding the bill might have one believing that prior to the Right to Try Act, patients had absolutely no access to experimental drugs, and consequently no hope. However, that is a false supposition, one that makes opponents to the bill seem heartless to the plight of these patients facing unfortunate circumstances. The bill was pushed through easily on emotional merit, but it is hardly endorsable if we take a rational view of its implications.

It is easy for politicians to point at the FDA and accuse it of being a bureaucratic machine that moves too slowly. Patients who survived a heart attack because a physician inserted a drug-eluting stent into their coronary artery might beg to differ. Let us first begin with a brief history of the FDA to understand its purpose and why we should not bypass it.

Theodore Roosevelt signed the Pure Food and Drug Act of 1906,3 which established the FDA as a regulatory agency that would ensure food products and drugs were not altered in ways that made them unsafe to consumers. This was in response to a growing number of illnesses and deaths that resulted from egregious practices by corporations to maximize profits by cheapening products. Corporations would use unsafe fillers to add bulk, coloring to conceal damaged products, or sell contaminated, spoiled, or rotting substances. If you need a reminder of how bad things were before the FDA, I urge you to pick up a copy of Upton Sinclair's The Jungle — a novel about the meat industry published around the same time this bill was passed into law.

Despite President Roosevelt's law, companies were still selling products that were dangerous to consumers, including radioactive drinks, blinding mascara, and antibiotics mixed with a byproduct of antifreeze.4 The final stroke was Elixir Sulfanilamide, a sulfa drug mixed with diethylene glycol instead of ethanol that resulted in 107 deaths in 1937 because diethylene glycol is poisonous to humans.4

Recognizing the FDA's inability to protect Americans, and in response to the growing public outcry over mounting deaths from dangerous products, President Franklin D. Roosevelt signed into law the Food, Drug, and Cosmetic Act on June 25, 1938.4 This law expanded the regulatory reach of the FDA, allowing premarket evaluation of products for safety and allowing the FDA to limit false therapeutic claims.4 In 1962, Congress again expanded the FDA's role to include determining whether drugs were efficacious for their intended use and whether the benefits of those drugs outweighed their risks.5 This delayed patient access to drugs under FDA regulatory review — that is, drugs not yet approved — to only those patients enrolled in clinical trials aimed at establishing safety and efficacy.

In the 1980s, in response to growing patient requests for access to experimental drugs on a companionate use basis, the FDA created an expanded access pathway with the purpose of administering experimental drugs to dying patients who otherwise had no therapeutic options.

The United States, like many other countries, has a policy of companionate use in place that allows experimental drugs to be administered to patients who have no other therapeutic options, under the supervision of a regulatory agency. Over time, these programs have allowed individual patients, small groups of patients, and even larger cohorts of patients to obtain access to experimental drugs when no other options existed. Thus, the title of the Right to Try legislation seems misleading in that it suggests that prior to 2017, patients did not have access to experimental therapies — when in fact, there have been established access pathways since the early 1980s.