Psychology in the Age of Trump: Does the Goldwater Rule Still Apply? 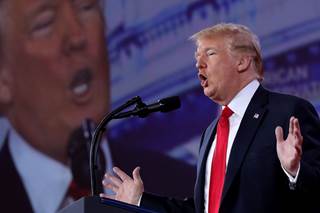 The Goldwater Rule prevents psychiatrists from commenting on the mental health of a public figure who they have not personally examined.

Before there was Donald Trump, there was Barry Goldwater.

Goldwater, an Arizona senator, broke in to the national political scene by winning the 1964 Republican nomination for president, running on a platform tailor-made to energize conservatives and enrage liberals. One of the more interesting reactions was published in Fact, described in the New York Times as a "muckraking magazine." Fact polled a few thousand members of American Psychiatric Association (APA), then ran a piece concluding that Goldwater was unfit to be president on account of what they deemed to be his megalomania, gross psychosis, and narcissistic personality disorder.1

None of the contributing physicians, of whom there were 2417, ever personally examined Goldwater. Nor did they have any basis for their assessments beyond his public statements and, presumably, the substantial distance between his politics and their own. The APA was suitably embarrassed by the absence of rigor and confidentiality in these assessments and hastily passed the Goldwater Rule,2 an amendment to the ethics regulations barring psychiatrists from giving professional opinions about public figures that they had not personally examined.

Goldwater would go on to get crushed by Lyndon B. Johnson in the general election, but the eponymous rule he inspired proved remarkably resilient and wasn't seriously challenged for close to half a century.

Until Donald Trump took up Goldwater's mantle of liberal-baiting conservatism, that is. Less than a year after Trump's win, the psychiatrist Bandy X. Lee, MD, an assistant clinical professor at Yale University, created a minor media stir with the release of The Dangerous Case of Donald Trump: 27 Psychiatrists and Mental Health Experts Assess a President,3 a collection of essays penned primarily by mental health professionals and entirely in contravention of the Goldwater Rule. That (presumably) left-leaning professionals would lash out at Trump is hardly surprising: he's using Goldwater's playbook, after all. But their justification for skirting professional ethical guidelines seems curious, as at least some appear to be arguing that their expertise and training impose on them a duty to warn the public of the threat posed by Trump's mental state.4

I can't tell you how much I wish that were true. But here's the problem: the landmark cases defining the duties owed by psychiatrists to the public aren't blanket rulings compelling all mental health practitioners to protect the entire public from all possible threats at all possible times.5 That would be absurd. What these cases actually say is that a therapist can breach physician-patient confidentiality if, and only if, she or he is trying to protect a particular person from a specific threat posed by a client under his or her professional care.

None of those conditions are met by psychiatrists musing about the president's mental health. Not only have they not personally examined the subject, but the threat they're concerned about is nebulous in both nature and direction. It's not even as if psychiatrists are unanimous in their belief that the president has displayed evidence of mental illness. Some dispute, for instance, that his personality has caused himself distress, suffering, or impairment, which are widely seen as bedrock characteristics of mental illness.6 And all of that comes before we reach the question of whether it's even possible to make accurate psychological assessments on the basis of thin data and remote observations.

Although I seriously doubt that the intemperate criticism of a historically unpopular politician will sound the death knell for the practice of psychiatry, if we look carefully, there's a way that this sort of behavior can be read as an assault on the entire specialty. Antipsychiatrists — inveterate disbelievers in the value of psychiatry — argue, among other things, that psychiatric diagnoses function as political devices intended to legitimize activities that might otherwise be prohibited.7 It seems to me that psychiatry is as legitimate as any other medical specialty, but isn't that an eerie encapsulation of the goal of Dr Lee's book? It ought to give psychiatrists pause that they're explicitly validating the sharpest criticisms of their staunchest opponents. Dr Lee seems to hope to substitute psychiatric diagnosis for political speech to destabilize Trump's presidency. It's hard to see this as anything other than an attempt at an end run around the political process.

Although some intellectual chicanery might feel justified in the Thunderdome that is our current political climate, it's worth considering the long view here: If public questioning of politicians' mental health becomes an effective political tool, what's going to happen next time there's a Democrat in the White House? For politically motivated physicians, it's a slippery slope and a long way down.