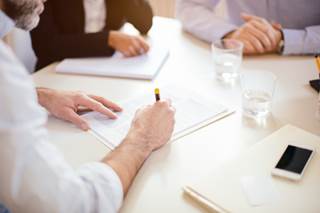 Providers should be prepared to ask for top rates, but know the bottom number for which they can settle.

Depending upon Congress' actions in the coming year, the insurance industry may be an entirely new landscape in 2018. But that does not mean providers should be satisfied with payers' rates and terms. Familiarity with current contracts and knowing how to negotiate better ones will be crucial to boosting income.

When working with clients, Jaimee Jones, Associate Director of Managed Care for Innovative Practice Services at McKesson Specialty Health in The Woodlands, Texas, said she always starts by giving them homework.

She has them go through files to ensure that the entirety of their managed care contracts are in their possession, including amendments and rates.

“It's important for them to understand their current reimbursement, have a comfort level with the terms in their agreement and to identify what the pain points are in moving forward to renegotiation,” she said.

She even recommends creating a quick reference document that includes terms and rates of all contracts, plan contacts, and other relevant information.

When figuring out where to hone negotiations, it makes sense to start with the largest payers. Contract rates typically will be set at a certain percentage above Medicare reimbursement, and providers may have some wiggle room to increase that slightly.

But if this is the only way providers look at contracts, they are missing an opportunity. Providers need to analyze which procedures and services constitute a large portion of their practice, and how these differentiate their practice from others in their area, said David Zetter, founder and senior consultant at Zetter HealthCare, of Mechanicsburg, Pennsylvania.

“There may be procedures that you provide that your competition doesn't,” Zetter said. “Or maybe you provide a higher quality of care or have better outcomes,” he said. “That is where you will have leverage.”

When renegotiating contracts, providers also should look at where they are having issues with insurers. Zetter recommends analyzing all reimbursement data for claims submitted for previous 2 years. In cases where a payer consistently causes hurdles for the practice or is not paying their contracted rates, providers have some leverage when they go into negotiations. They also may have a basis for requesting retroactive payment on those claims.

“You should have reimbursement rates in your practice management system that will tell you if you are being paid appropriately or not,” Zetter said. “If you don't have that, you are already behind the eight ball.”

If providers use outside vendors to manage their revenue cycle, these vendors should be verifying payments with their copy of the providers' reimbursement fee schedules. If the vendors do not have them or are not verifying payment rates, they are not doing their job fully.

Jones said providers should be alert for language that is “payer favored,” especially with respect to amendments. Any amendments a payer makes to a contract should be agreed upon, in writing, by both parties. Payers should not be making unilateral changes, and having mutual amendment language will guard against this.

The contract also should include a provision that a practice is notified regarding policy changes, including those affecting fee schedules, reimbursement rate changes, preauthorization, and other requirements that could cause administrative burden to the practice and be considered material in nature. Jones said she often works with clients whose reimbursement rates were changed by the payer and the provider did not even know.

Many contracts only require notification of policy changes on the payer's website, which providers may not be monitoring. It is also prudent to include language stating that any changes a payer makes to a contract give providers a right to renegotiate the contract.

Finally, providers should look at claim filing and payment deadlines. They should be provided enough time to submit claims. Contracts should include payment deadlines that ensure timely payments of claims and reasonable dispute timelines so that resolutions do not drag out indefinitely.

Most payer contracts are evergreen, meaning that providers probably have been happy to let them roll over without any effort on their part. But when providers opt to negotiate contracts, they should review the terms of the current ones. Depending on language in existing agreements, a practice could be held to a window of time in which they can request renegotiation; for instance, the request may be required to be submitted with 60, 90, or 120 days advance notice prior to the contract renewal date.

Unless there are rate escalators built into a multi-year agreement, Jones encourages practices to contract for 1-year terms so they have an opportunity to return to the table frequently. The key is having calendar reminders of when anniversary dates for contract renewals are coming up, since most contracts will keep renewing year after year.

“If [practices] perform a rate review annually, they can look at those numbers and analytics because their payer mix can and will change over time,” Jones said. “Different employers might be choosing different payers, a practice's Medicare and Medicaid business may shift up or down…so keeping abreast of their payers is important as it relates to overall practice reimbursement.”

If payers balk at 1-year terms, make sure to include rate inflators. If a practice has a 3-year contract, for instance, it should rate inflators for years 2 and 3. When those are implemented, providers will need to run annual reports to ensure the rates are escalated on time.

Practices that can show payers they are worth high rates will have an easier time negotiating increased reimbursement rates. Practices should pull data from their practice management systems to demonstrate what sets them apart from the competition with regard to value, cost, and quality, according to Zetter.

Jones recommends that providers invite contracting representatives and medical directors to their offices during negotiations. This strategy is particularly beneficial for practices that provide services at lower costs than other sites of services.

“Invite them in to take a tour and show the value-added services you provide to their members. This goes a long way in relationship building and beginning those conversations relative to renegotiating.”

Zetter noted that practices rarely get what they ask for in negotiations. Providers should be prepared to ask for top rates, but know the bottom number for which they can settle. Providers may be able to start low and escalate reimbursement through rate inflators.